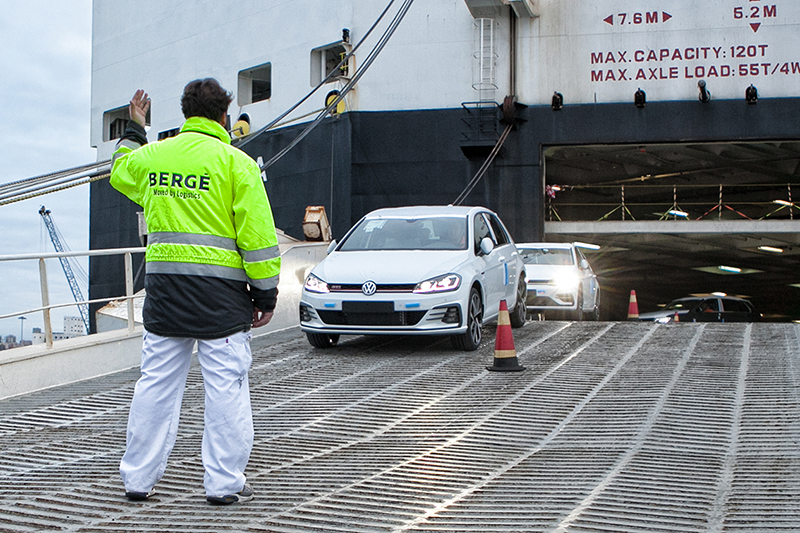 This contract, secured after the open national tender put out by Volkswagen Group España Distribución and now ratified and signed by Volkswagen Konzern Logistics, was awarded to BERGÉ for the high level of capacity offered by its logistics centres, the quality and equipment of its workshops and the multimodal nature of its facilities.

The contract, which has a term of three years and can be extended by another two, involves the management of the volume of vehicles imported from the different Volkswagen Group factories (21) that are of the makes Volkswagen, Audi, ŠKODA and Volkswagen Commercial Vehicles, with 180,000 vehicles expected in the first year.

BERGÉ has three large logistics centres located in Santander, Ciempozuelos (Madrid) and the port of Tarragona to meet the needs of Volkswagen Group España Distribución throughout Spain in its large areas of influence: North, Centre/South and East.

Among the main competitive advantages of by BERGÉ are its high storage capacity (it currently manages over 2 million m2 to store over 100,000 vehicles) and also the quality and equipment of its 30,000+ m2 of workshops (for preparing deliveries, installing accessories, customisations and transformations, repairing bodywork and paintwork or any other technical service). Additionally, other competitive advantages include the anti-hail protection in several of its facilities and the multimodal connections at its centres (train, regular boats and “Spot”, and trucks). BERGÉ currently transports 600,000 vehicles per year by road with its fleet of 400 trucks.

The contract awarded to Bergé forms part of the ‘Green Logistics’ strategy and programme by Volkswagen Group España Distribución, which has the strategic objective of reducing the CO2 emissions of logistics operations, among others.

The Purchasing and Logistics Manager at Volkswagen Group España Distribución, Miguel Mas, pointed out that “the company aims to locally position itself as the leader in environmental innovation throughout the whole logistics chain. We want to be the most efficient national sales company in the Volkswagen Group”.

For BERGÉ, this new contract reinforces its long-term commitment to the automotive industry with its concessions at port terminals, investments in car lots, workshops, etc.

Volkswagen Group España Distribución (VGED) is the first car distributor in Spain. The company, which started out in 1993, sells vehicles, services, components and spare parts for the makes Volkswagen, Audi, ŠKODA and Volkswagen Commercial Vehicles in mainland Spain and the Balearic Islands.