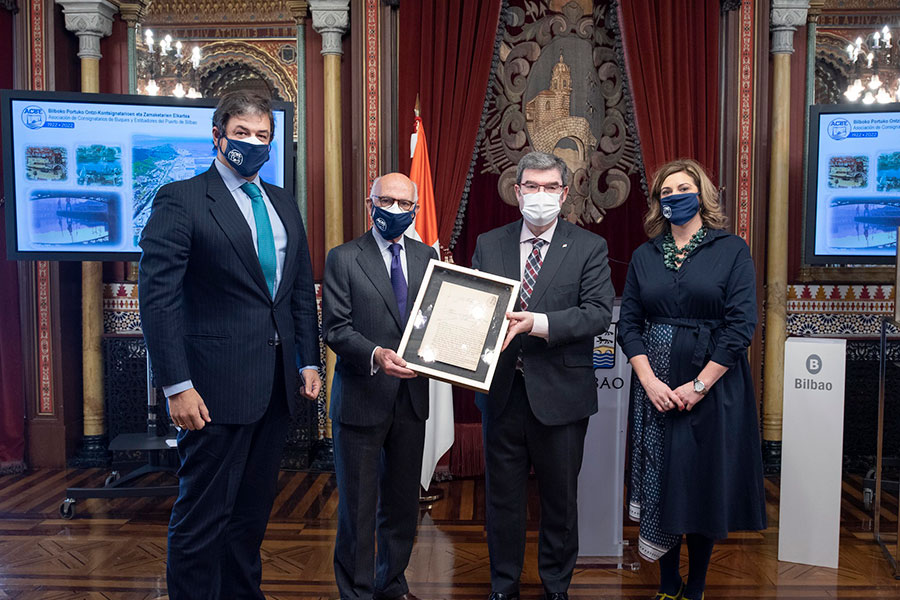 The reception, presided over by the mayor of Bilbao, Juan Mari Aburto, and the Municipal Corporation, paid tribute to three of the founding members who continue to be part of the ACBE: Bergé, Erhardt and MacAndrews & Cia (now, Containerships CMA CGM).

BERGÉ, represented by the vice-chair of Bergé y Compañía, Pedro Enciso Bergé and Juan Aguirre Aguirrezábal, Managing Director of BERGÉ, took part in the reception held last Friday 28th by the City Council of Bilbao to celebrate the one hundred year anniversary of the Association of Shipping Agents and Stevedores (ACBE) of the Port of Bilbao.

During the reception, the mayor Juan Mari Aburto presented awards to three of the founding companies that are still part of the ACBE. “These three companies are without a doubt the jewel in the ACBE’s crown” Aburto said, explaining that “since the days when the MacAndrews ships –dubbed the ‘macandrios’– put that British stamp on Bilbao that is so characteristic of our city, the surnames Bergé and Erhardt have made deep roots in our society, extending through much of the institutional and business fabric of this long century in Bilbao’s history.”.

The reception was also attended by Ricaro Barkala, chair of the Port Authority of Bilbao, the chair of the ACBE, Virginia Navarro, and several of its ex-chairs.