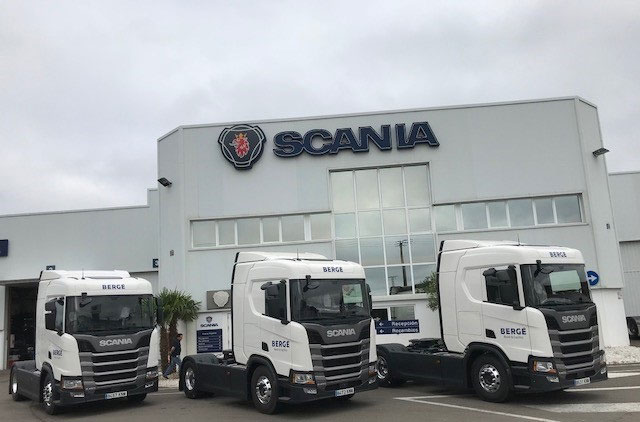 BERGÉ has expanded its fleet of trucks to strengthen the cargo transport service from Galician ports to warehouses and production centres in the region or in other nearby autonomous communities such as Asturias and Castile-Leon or the north of Portugal.

The ports in the north of Spain are those that receive the most solid bulk cargo per year and around 25% of these are managed in the autonomous community of Galicia. In order to meet this demand in the area, BERGÉ offers consignment, stevedoring and transport services (managing over 500,000 tonnes/year in all its activities) and also storage for over 60,000 tonnes in its own warehouses.

So as to further improve the transport area, BERGÉ has purchased three new Scania R-series trucks, which will be primarily used to transport industrial solid bulk cargo, such as coal or coke, and agri-food bulk cargo, from Galician ports to client’ warehouses, production centres or logistics centres.

During the last year, BERGÉ has increased its fleet of trucks by more than 20% throughout Spain. With this new expansion, the company now has a fleet of around 40 trucks to offer various transport services.

The new trucks are thus added to the current ones, meaning that the A Coruña branch now has a fleet of 12 trucks, of up to 40 tonnes, for the provision of its daily services.
BERGÉ’s commitment to land transport can be seen in the branches where this service plays a key role. In addition to A Coruña, this increase is also of note in Cartagena, where five new Volvo trucks have been purchased.

The aim of BERGÉ is to promote its presence as a comprehensive logistics operator and offer the client the best service from origin to destination. With this purpose in mind, it has decided to strengthen its land transport service (among other aspects) and cover the entire logistics chain.